The Transparent Labyrinth by Keiichiro Hirano 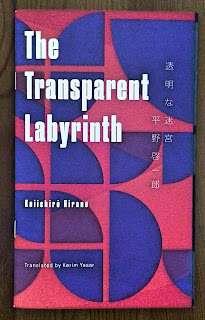 The Transparent Labyrinth is the eighth and last title in the recently published series Keshiki - New Voices From Japan from Strangers Press, a part of the UEA Publishing Project, Norwich, the story is translated by Kerim Yasar, Hirano has been awarded many literary prizes among them the Akutagawa Prize. The Transparent Labyrinth is a thoroughly contemporary tale, set predominately in Budapest the story is narrated by Okada who has travelled to the city on business and whilst there he makes the acquaintance of Misa - a young Japanese woman whose reasons for staying on in the city seem to tie in mysteriously with a female friend of hers - Federica, Okada speculates to himself that there is the possibility that the two are lesbians, but despite this Okada and Misa are drawn to each other, a fractiously fraught relationship is kernelled. An aspect to the premise and theme of the story is reminiscent of Rupert Thomson's The Book of Revelation, and in his foreword John Freeman points to Ian McEwan's The Comfort of Strangers for likeness, although unlike Thomson's novel the difference here is that instead of a kidnapping over a prolonged period, Okada and Misa find themselves taken to a Bacchanalian orgy where they're coerced into making love in front of a selected group, this episode is brutal with it's scenes of sexual violence including male rape.

An aspect of Hirano's prose which impresses through this short piece is of his ability to paint an absorbingly detailed portrait of his protagonist as he works through the various enigmas that he finds himself in and presented with. Initially there's the disarming events of the evening of enforced sexual escapades and it's ramifications, and also of the enigma of Misa and his feelings for her, as she disappears and re-appears in and out of his life, a wider game of incomprehension seems to be playing out though just out of sight for the reader, some kind of answer occurs to the end of the story which acts to wrong foot, although in a way it remains partial. Another aspect to the story is of Okada trying to reconcile and release himself to the past events which he and Misa endeavour to grapple with, what had violated them also binds them, the psychological forces that flow beneath the story feel fractious, bifurcated, and again Hirano handles this infectiously well. Although I've picked up the last in the series first, mainly attracted by it's enigmatic title, The Transparent Labyrinth was a compelling and provocative start to what looks to be a fascinating and welcome series of stories.


The Transparent Labyrinth at Strangers Press

Thanks for making me aware of these (with your previous post). I've been lucky enough to be sent a set, and I'm hoping to get onto some very soon :)

They all look great, looking forward to reading my way through them all too.