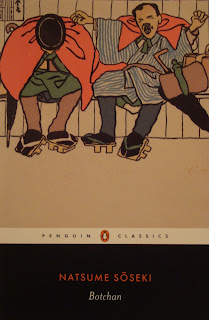 In a translation by J.Cohn, Botchan, is the fourth title by Natsume Sōseki to be published by Penguin Classics, previous titles have included; Sanshiro, translated by Jay Rubin, Kusamakura and Sanshiro, both translated by Meredith McKinney. Botchan first appeared in 1906 the same year that Natsume produced Kusamakura and also Shumi no Iden, (translated as The Heredity of Taste), in some aspects the perspective of the narrative of Botchan  resembles that of I Am a Cat, where the view is that from an outsider, in I Am a Cat we see the drama unfold from the cat's perspective, in Botchan the perspective is seen from Botchan, a Tokyoite, and considered Edokko, who takes a teaching post in a remote town in Shikoku. His honorific name mixed with a term of endearment is given to him from the family maid, Kiyo,  throughout the novel we never learn Botchan's true name, although we do learn something, in slightly comical style, of his genealogy. The novel opens with a telling of the events of his parents deaths, and then the dissolution of the family home as his brother leaves to pursue business leaving Botchan some money to do what he wants with, Botchan uses it to study. The story is one dotted with a farcical humour through various episodes and scenes, the grasshoppers, the fishing trip, (where we are first introduced to the slightly enigmatic character referred to as the 'madonna'), the fight scene between the rival schools, although the full realization of the humour it could be said is saved for the climax of the novel. Botchan is a fantastic and bewildering character, and probably one of Natsume's most iconic, forthrightly clinging and pursuing to the truth as he sees it, (and by turns we see it), he also points to a certain reckless spirit as a family trait. Although through the focus of the narrative our empathy falls with Botchan, we find that in the wake of his story his actions have thrown up many questions which at the time of it's publication must have resonated with the reader leaving them to reconsider notions of the traditional, and in a way give form to what or how things maybe in the future, although Botchan remains a mixture of both the old and new, perhaps Botchan and his nature could be seen to form a middle ground that pushes both temporarily aside.

After graduating, Botchan takes up a post in Shikoku as a maths teacher, the first gist of the petty bureaucracy of the place can be seen when the principal hands him his certificate of appointment which he then makes Botchan present to each of the other teachers in turn when introduced, it doesn't take long for Botchan to rename all of the teachers with nicknames, Redshirt, Hanger On, Porcupine, Pale Squash. The novel is almost ambidextrous in the way it manages to shift between humorous anecdote and moral observation, Botchan's pursuit of the moral seems to begin and end with appearances to the degree that in the end when an act of  subterfuge by the principal is discovered we begin to get the fuller impression. Another prevalent aspect to the novel is that of the meeting between the metropolitan and the provincial, with Botchan coming from Tokyo we perceive the characters from his outsider's point of view, as the drama progresses we get the impression that both sides exhibit a certain stand off-ish indifference to each other, Botchan is regarded as being the outsider which adds to his frustrated exasperation in turn fueling his animosity, a sense that Botchan is in far off territory is seen through his letters to Kiyo back in Tokyo. The behaviour of his first landlord also adds to his bewildered impression of the nature of the local people As is with Natsume's prose in translation it can at times feel acutely compacted, Botchan's narrative is wholly absorbing, occasionally the external world is referenced in snap shot, a near naked boatman clothed only in a red loincloth/fundoshi, and when stepping out at night he sees, 'the milky way streaming across the sky overhead', in these little instances we again realize that Natsume's novels have a poetical dimension.  Much has been written about the nature in some of his scenes between some of the male interactions that appear in Natsume's novels, another scene here sees Botchan squeezingly test the muscles of one of his colleagues.

Towards the ending of the novel the external world begins to infringe to a greater degree when Botchan witnesses the war victory celebrations, dazzled by the patriotic fervour and fireworks, Botchan's attention is caught by the swordsman's display, his concern is focused on the dangerous sharpness of their blades. Botchan is a curious novel which can be appreciated in many ways, there are so many subtle portraits and scenes in it which encapsulate a portrait of the shifting Meiji zeitgeist between the old and new, and the emergence of the influences of the West. Natsume's versatility is awe inspiring, reading Botchan is a unique experience, there is also the aspect that Natsume drew on his own experiences in writing it, the onsen that Botchan visits, (Dōgo Onsen) is the same one that Soseki used, and also the inclusion of Iyo dialect, an example of which Cohn has left in his translation.

Many thanks to Penguin for providing a preview copy.

I've been meaning to read Botchan for sometime, it's referenced to so often in other things that I've read.

I also have two other novels by Natsume to read for the future, but he is an author I'd like to read more of.

What a wonderful, intriguing review you've written. I most particularly am caught up with this line: "Botchan is a fantastic and bewildering character, and probably one of Natsume's most iconic, forthrightly clinging and pursuing to the truth as he sees it, (and by turns we see it), he also points to a certain reckless spirit as a family trait." I've long been meaning to read Natsume's books, and Botchan sounds like the perfect place to start.

Thank you!, I think Botchan is the third or fourth of Natsume's novels I've read and agree that it would make a great starting point in exploring his writing.

I have the same translation, but in a previous Kodansha International version (I wish I had the Penguin version - I have the other three you mentioned!).

I've now read seven of Natsume Soseki's works, and I've just got one in the post ('The 210th Day') and am waiting for another to arrive ('Grass on the Wayside').

I'm actually considering a mini Japanese challenge, January in Japan, so they would come in handy if I managed to get that up and running :)

I've read Grass on the Wayside many years ago, so my memories of it are very slight.

This year I've tried to catch up with the gaps in my reading of Natsume and Abe Kobo, I think so far I'm slightly ahead on the Abe, so maybe catching up with Natsume will be for next year, perhaps in time for your challenge!.