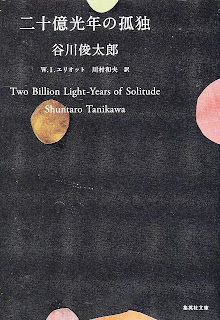 Recently bought this, a little pocket edition, (although in Japan paperbacks are pocket size), of poetry by Shuntaro Tanikawa. 'Two Billion Light-Years of Solitude' first published in 1952, (it's been in print ever since), written between 1949-1951 and translated by William I.Elliott and Kazuo Kawamura, brought out by Shueisha Bunko . I think another collection of his sonnets has also been recently re-issued in an edition very much like this one. It also contains a small section of facsimiles of Shuntaro Tanikawa's original notebooks. This, so far, is one of the most rewarding book purchases I made this year, as stated in another post, Shuntaro Tanikawa has been the subject of speculation over the Nobel Prize, not really sure how true these speculations are, but reading through this collection, I wouldn't be at all surprised.

A theme that seems to me to be prominent in Tanikawa's poems, well in this collection, is the passing of time, some of the titles of the poems are the names of the seasons, and another re-occurring subject is the weather, mentions of the rainy season, downpours, cloudy days, quiet rainy nights, but mainly Tanikawa makes us consider time and how we perceive it, prompting us to question our interpretation of what 'now' actually means to us and to maybe re-evaluate our sense of our position in time, I think Tanikawa acknowledges that we are here for such a small fraction of time, but not for a moment considering it meaningless. The poems are in modern style, and still retain their modern feel, 'Impromptu Poems On The Desk' has an experimental feel, the poems are observational, non-judgemental, with a certain optimism to them, although many are tinged with sadness, as if the narrator has been abandoned/lost in time, but seeming not to fall into despair. Few of them mention God, in some the narrator will talk of just watching God, not believing, and others include prayer, but they don't have much of a religious tone to them,they do have a very humanistic sentiment. Others encapsulate a world whilst stirring a cream soda, the underlying theme most prominent is solitude, and most of these poems talk about solitude in a universal scale, but although they pinpoint to a certain moment, they also have a timeless quality to them, I think that's why their appeal is long lasting. He has a great way of tackling something like a sense of solitude or loneliness and address it in a way that everyone can relate to. I think the poem that stands out for me at the moment is one called 'Sadness' and the title poem, which I keep returning to at the moment, and 'The Surroundings' with it's billions of years in front and behind us.

In 1989 he won an American Book Award for his collection 'Floating the River in Melancholy' also translated by William I.Elliot and Kazuo Kawamura, which is out of print for the moment.


Some other available collections of his poetry-