Salamander and Other Stories by Ibuse Masuji 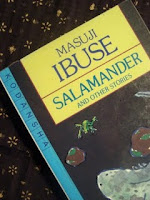 Masuji Ibuse, (1898-1993), is another author I've been meaning to read for quite a while, famous for his 1966 novel 'Black Rain', a survivor's story of the atomic bombing of Hiroshima. Through reading Osamu Dazai's 'Self Portraits', Ibuse's name was mentioned a number of times, so I thought it time to read some of his stories. 'Salamander and other Stories' published by Kodansha International and translated by John Bester includes nine stories, written between 1923-1955. Originally published as 'Lieutenant Lookeast and other Stories' as hardback, which included an extra story. I think there was a UK edition published by Secker & Warburg. A book I'd like to read being, 'Pools of Water, Pillars of Fire: The Literature of Masuji Ibuse', by John W.Treat, which I think is now out of print.

Reading through this collection of stories made me wonder how much autobiographical material was involved in them. Reading through his entry on kirjasto, the material for the satirical piece 'Lieutenant Lookeast' was probably taken from Ibuse's own experience of military life, the story of Lieutenant Yuichi Okazaki's, (Lieutenant Lookeast), erratic behaviour, suffering delusions that the war is still on, to the extent of shouting out military orders to people passing his house. His story is told by Yoju, (from the same village as Lieutenant Lookeast), a soldier recently returning home had sat next to former sergeant-major Ueda on a homeward train from Tsugaru, who told him how Yuichi had come to loose his wits. One day while Lieutenant Okazaki's unit were travelling, they came across another unit rebuilding a bombed out bridge, when the job was completed the men were talking leisurely, and Lance-Corporal Tomomura let slip the remark, 'War is an extravagant business'. Lieutenant Okazaki was thrown into a rage and infuriated by this remark and began to berate him, hitting Tomomura whilst standing at the rear of the truck, just at that moment the truck lunged forward and the two men fell out, both falling out of the truck, down an embankment and into a river, hitting rocks as they fell. Tomomura washed away, presumed dead, but Lieutenant Okazaki was pulled from the river, with a broken leg and showing obvious signs of concussion. The men made a makeshift grave for Tomomura, noting how fate had stricken him a cruel blow, not only being slapped about the face before he died, but also hitting the rocks, maybe dead before he was washed away by a nameless river. Lieutenant Lookeast got his nickname it's revealed, as he always made his men bow to the east, earning the nickname the 'Lookeast Platoon'. Lookeast also being a staunch advocate of the Field Service Code, '...once you begin to understand it, it will fill you with a kind of intoxication..' he tells his men. Ibuse notes about Tomomura , that he was fond of speaking his mind, to the extent the he had undoubtedly been a poor soldier. Lieutenant Lookeast is an interesting piece of satire, looking at what must have been seen as the 'old' order, when Ibuse wrote it in 1950.

Mostly though the stories are set in rural Japan, concerning tales that most villages and small towns have. 'Old Ushitora' tells of a family quarrel over the grandfather's profession, of bull breeder, a unique story. 'Carp' and 'Savan on the Roof'  both, presumably have an autobiographical element to them. 'Savan on the Roof' concerns the rescue of a wild goose, which the narrator believes must have been shot by mistake by a hunter, charting the goose's recovery and then the narrator's reluctance to let the bird free. 'Carp' is an encounter with a carp that is given to the narrator as a gift to mark a friendship. At first the narrator puts the carp in his boarding house pond, but then has to move, throughout the story the carp is an object of consternation for the narrator, again because of a move he has to leave the fish with his friend's girlfriend. Time passes and the friend who gave him the fish falls ill and passes away. Eventually after a move to Waseda University he releases the carp into the University pond. On a restless night when he can't sleep the narrator decides to take a stroll down by the pond, and spies his white carp, swimming about like a king, with dozens of dace and killifish, trailing behind, giving his fish a lordly air.

There's an understated emotion to these stories and a subtlety that stayed with me after I had finishing reading them, mainly about everyday people and the tales from small town and rural Japan, told with a slight humour, as John Bester states in his preface, an absence of sentimentality and a deep lying humanity. After reading this I'd very much like to track down copies of, 'Castaway' and 'Waves'.


Stories included in Salamander and other Stories -

Thanks for an excellent review of Salamander. I like your description of the "understated emotion" in this book of short stories. I am currently reading Lizard, a collection of short fiction by Banana Yoshimoto.

Sorry for the delay, thanks for the comment. Out of this collection Carp is a story that still stays with me.