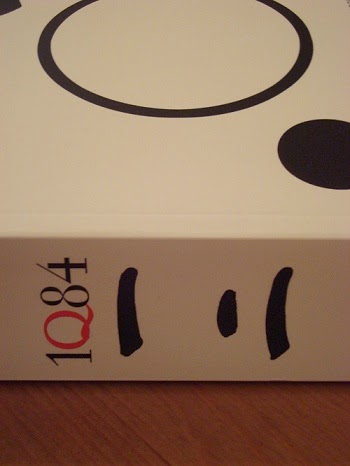 Unexpectedly an uncorrected proof of books I and II of 1Q84 came my way recently, I must have been standing in the right time and place, 1Q84 is undoubtedly one of the most anticipated translations to arrive this year, these first two books are translated by Jay Rubin and the third is translated by Philip Gabriel. The last of Murakami's fiction that I've read was Hear the Wind Sing, and then more recently I read the non-fiction, What I Talk About When I Talk About Running, amongst his longer fiction I've still yet to read is Kafka On The Shore and Dance Dance Dance, 1Q84 has been described as Murakami's magnum opus, the narrative behaves in the way we have come to associate with Murakami, pulling the reader in with a magnetic like force. It might be difficult to write anything on this first book without letting slip some of the elements of the plot, but I'll try not to give away too much, although there's already many places on the net that have given a spoilers and all account of the novel in it's entirety.

The narrative of Book 1, (and I think it continues on into Book 2), is divided, chapter by chapter, between the two main characters; Aomame and Tengo, although as the narratives continue in Tengo's side it could be said that the focus turns to Fuka- Eri, although the perspective is always from Tengo. As usual being a Murakami novel there's reference to quite a few pieces of music most prominently to begin with is Janacek's Sinfonietta, which is playing in the taxi which Aomame is sat in at the start of the novel, which then floats in again a little later, another element familiar in Murakami's novels is the mention of other books, as might be expected Orwell's 1984 is referred to, as is the The Tale of Heike and Chekhov's book on his trip to Sakhalin Island, Tengo reads to Fuka-Eri of the Gilyaks, also another familiar aspect is that both the narratives are permeated with moments from history. Tengo when introduced is coming around from having a kind of seizure, during which a reoccurring memory comes to him from when he was one and a half years old, of his mother with a man, (who Tengo is certain was not his father), who is suckling at her breast. This scene hovers around Tengo throughout the novel and the question of his father's true identity seems to hang in some speculation, his father as Tengo remembers him collected subscription fees for NHK, which on Sundays Tengo had to accompany him with. Another prominent character in Tengo's side of the narrative is Komatsu who is an editor of a literary magazine, and has a history in the student riots of the 1960's, Komatsu wants Tengo to rewrite a manuscript of a novel he's received called Air Chrysalis, whose author Fuka-Eri appears very enigmatic, who asks questions without using question marks. Tengo is reluctant at first but Komatsu persuades him into meeting Fuka-Eri and her guardian; Professor Ebisuno to obtain their permission for the rewrite. The details of what Air Chrysalis is actually about are slowly revealed, set in a mountain commune and populated by Little People who enter this world through a blind goat, Komatsu sets his sights on winning the Akutagwa with it and making a lot of money, you get the impression that Murakami is having a little dig at the business side of the literary establishment.  When meeting Professor Ebisuno, Tengo learns that he was part of the student riots at the Univesity of Tokyo and that he was a friend of Fuka-Eri's parents, who after fleeing the city had created a religious retreat called Sakigake, which began farming and selling organic vegetables, the group split though and the more militant Akebono group was formed, this group was involved in a shoot out with police, in which the members were killed or arrested, one though managed to escape, as Book 1 ends who this person could be is not answered, Professor Ebisuno, or even Komatsu perhaps?.

A major character in Aomame's narrative is her high school friend; Tamaki Otsuka, when the pair were young they had a fleeting lesbian experience, although this encounter doesn't define their relationship, the two are close and they learn that they can confide in each other. Tamaki marries and appears to settle down with her husband, all the time though she had been suffering physical abuse from her husband and eventually commits suicide, this acts as a catalyst for Aomame into shaping what she will be in the novel. Another character known as the Dowager of Azabu whose daughter suffered abuse from a violent husband provides the means in which Aomame can carry out punishments to abusive men, the Dowager has set up a safe house giving sanctuary for abused women. Aomame's history too has a connection to a religious sect, her parents were members of a Christian group but Aomame broke away, as the novel progresses Aomame's consciousness begins to show strange signs, she notices a difference in police uniform and the model of gun they carry which makes her begin to question whether she has slipped out of the year 1984 which she is in and has moved into 1Q84 a parallel year, things begin to get stranger with the appearance of a second moon that hovers in the sky next to the usual one, Aomame is too anxious of the answer she'll get if she asks if anyone else can see it, whether this is symptomatic of Aomame's projected sense of self or a genuine change in something much larger I'm guessing is clarified in Book 2, as the two moons feature again at the closing of Book 1, appearing in the last scene with the Dowager, this sense or depiction of a duality to Aomame's state of mind I remember being something that also occurs to Sumire in Sputnik Sweetheart . Book 1 is a little over three hundred pages and the majority of it is taken up with exploring the character's history and the reader gets a sense that Murakami is putting things in place for Book 2, there are plenty of leads that are left open here that could go anywhere, it's not until two thirds of the way through Book 1 that Tengo and Aomame's narratives show any signs of merging. Aomame forms an unusual friendship and alliance in a policewoman called Ayumi, the Dowager introduces Tsubasa, a ten year old girl staying at the safe house to Aomame which in turn leads Aomame to begin investigating the activities at Sakigake, Tsubasa talks too of the presence of the Little People. There's obviously much more to Book 1 which I've not touched upon, but like with Murakami's other novels there's much here that is in full view and always a lot more to be explored that is obscured to a first reading.