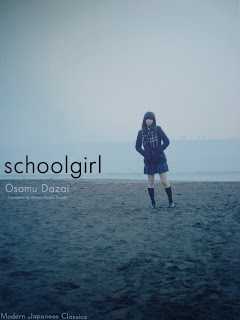 Recently published by One Peace Books comes this early novella by Osamu Dazai translated by Allison Markin Powell who has also translated Hiromi Kawakami, (a translation of Kawakami's Tanizaki Prize winner, Sensei no kaban/The Briefcase is forthcoming in March 2012), and has also translated Motoyuki Shibata, and Kaho Nakayama. The narration here is set in the war years and comes from a young girl whose family has recently lost their father, within many of Dazai's narratives, whether they're male or female, the presence of Dazai's voice can often be detected somewhere within, much of Dazai's craft with his fiction is his ability to disguise this fact. Many of his stories and novels are peopled with figures who are not swimming in the same direction as the rest of society, or hold contrary beliefs or visions. The details of the girls background  are slight and the focus of the novella is in capturing the girls stream of thinking which we follow over the course of a day. She takes a train to school, getting off at Ochanomizu, perhaps a more thorough student of Japanese Literature could write a small tome on the appearance of Ochanomizu in Japanese novels, as the place is mentioned in a few I've recently come across. At school we read her observations on her teachers Miss Kosugi and art teacher Mr Ito, she has been told off as she embroidered a flower pattern on her underclothes, something inappropriate in the austere times. The narrative captures really well the nuances of thinking of the young girl and the flaws that she observes in others often bounce back at her ending in self recriminating reflections on her self. When she returns from school, she finds her mother has house guests, the Imaidas, she observes - While surely there's something to be said for suppressing your own feelings for the sake of others, if everyday from now on I was forced to nod and smile at people like the Imaidas, I would probably go mad. As with much of Dazai's fiction there is a brittle melancholy to the piece, sitting at the porch in the evening washing out her things she imagines another girl like herself sat in a flat of a Parisian backstreet, sharing her sadness with this imagined figure - Nobody in the world understood our suffering. In time, when we became adults. we might look back on this pain and loneliness as a funny thing, perfectly ordinary, but - but how were we expected to get by, to get through this interminable period of time until that point when we were adults?. The novella catches this moment of transience, what is remarkable about the piece is the absence of the commotion of the external world, only events linked  directly to the immediate family are touched upon, and amongst these events she still ponders on the good things that humans can do, there are pointers of the age of the novellas setting, the actor Jushiro Konoe, a reading of Kafu Nagai.

The book has been fantastically presented with a bit of a refreshing contemporary twist which works really well, Allison Markin Powell's translation flows really well, to read this translation is to experience this girl's thoughts and observations with a clarity that tugs effectively at the reader's empathy. A passage at the beginning of the book that stood out is when she takes off her glasses, looking at the world she prefers to see things slightly blurred and out of focus - I like to take my glasses off and look out into the distance. Everything goes hazy, as in a dream, or like a zoetrope - it's wonderful. The novella has a contemplative tone, capturing her reflections on her family, the change in her mother since the death of her father, her thoughts on her sister, briefly she remembers them living together in their previous house, and she receives a letter from her cousin Junji being transferred to a regiment in Maebashi. I only hope that this is the first in a series of Modern Japanese Classics from One Peace Books.

Ah, I haven't read this before, but it looks interesting! Dazai's novellas are really something!
I should really just go through Dazai's Aozora Bunko page and read them all sometime. ^-^

I've not checked but I'm guessing they have Dazai's Zenshu?, I've got some more short stories to read by Dazai and I'd like to read Phyllis I.Lyons book in the future,although I struggled with Blue Bamboo a while back, may have to give it a re-read, thanks for commenting!.

I found myself almost wanting to quote something from every page of this novella, I really enjoyed reading it. Glad to hear you've got a copy and am looking forward to reading your post!.

Yeah, Dazai's in the public domain in Japan, so they have pretty much everything he's written out on Aozora Bunko, only in Japanese though. It's a shame Dazai's novellas aren't more well known...

I get the impression, maybe wrongly, that Dazai is not as widely read in English, maybe not to the same degree as Kawabata, Tanizaki or Mishima, which is a pity. I don't know how much there is to his unfinished novel 'Goodbye' but I'd be very interested to read it one day.

Yeah, me too! It's a shame, because most of his works are on Aozora Bunko, which means they are public domain, and any translator who wanted to could translate it, but maybe the market for Japanese lit isn't that great, not to mention the average literary translator's salary is pretty low from what I've heard.
I didn't know about "Good Bye"...Aozora Bunko has "Goodbye" and "Goodbye-Author's Notes". Just glancing at the text (http://www.aozora.gr.jp/cards/000035/files/258_20179.html), it doesn't seem to be too long...

Looks like 'GoodBye' was also part of a dramatisation of three Dazai short stories broadcasted by NHK during September 2010,others included 'I Accuse' and 'Crackling Mountain', would have been interesting to see. Perhaps the translation of 'School Girl' will prompt more translations of Dazai's stories, thanks for the link.

Oh really? I wish I had seen that too. I saw the "No Longer Human" and "Run, Melos!" adaptions in the "Aoi Bungaku"(blue literature) animated series, and enjoyed them (the first especially, was pretty awesome ^-^), but I wasn't too aware of other adaptations.

I hope so. Dazai should be more popular in the West than he is!

I've not seen these yet, they sound interesting, I've also yet to see the recent 'Villon's Wife' movie with Asano Tadanobu, and the 'No Longer Human' and 'Pandora' Box' movie adaptions, there's been lots recently!. Think I'll have to re-read 'Villon's Wife' now that I've mentioned it..

Wow, so many movie adaptations!
Is "Villon's Wife" good? I'll have to add it to my "to read" list now.

I enjoyed reading Villon's Wife a great deal, another story I've been meaning to revisit for quite a while.

Wow your comma usage borders on the stroke-y. It's like you've never heard of the full stop or the semi-colon.

Oops sorry, great to know that this post is still being read though - have you read it?.