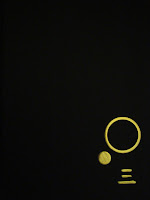 One of the first differences to Book Three is that of a third narrative being added to Tengo's and Aomame's, that of Ushikawa's, some of the details to his character are sketched in and explained further, Murakami devotes a lot of pages to exploring this character and illustrating his background. Tengo's situation at first doesn't change a great deal, he revisits his father who is still in a comatose state in the sanatorium in what Tengo has named the cat town. Aomame's fate alters from where we thought it was heading at the end of Book Two. Fuka-Eri, (still hiding out in Tengo's apartment at first but then disappears again),  Aomame and Ushikawa receive a visit by a persistent NHK fee collector,  knocking on their doors to collect their subscription fees, the true identity of this collector remains one of the novels enigmas, along with the fate of Fuka-Eri, Murakami's main narrative in the third book is following Tengo and Aomame's story, at the end of reading  Book Three  Murakami has left a lot of unexplored territory to cover if he were to return to write additional Books to 1Q84. Another difference to Book Three is that the pacing  slows markedly in comparison to Books One and Two giving Book Three an altogether different slightly more measured tone to the previous Books, in hindsight it felt like it could be said that the main character of a good portion of Book Three is Ushikawa,  the feeling that you're sat with him in the apartment looking watch over Tengo's apartment is palpable. There are large passages of descriptive text in the book, and much of it witnesses the character's circumspection of both unestablished and established aspects of the plot but there are also some vivid passages too, and for me these were amongst my favourite parts of the book, with this in mind it's difficult to contemplate 1Q84 as a whole entity, it dips and peaks, the chapter, 'Occam's Razor', seemed like one of the most hurriedly constructed chapters that I've read in a novel in a long time, for Ushikawa to connect so many threads together in such a short space left me slightly reeling, but I enjoyed how Book Three carves out its own spacious world.

Several stand out scenes for me in Book Three included the description of Aomame's dreams, three of them to begin with, in one Aomame appears to become transparent, where she can still see her vital organs and bones beneath her skin, this depiction of identity loss is echoed with Tengo's father's statement after Tengo asks him about his place in regard to his parentage, You're nothing, Tengo's father replies, which leads me to another passage that I thought  was  another of the novel's peaks, the description of the contents of the envelope that Tengo's father leaves him, Tengo's certificates and the description of the family photograph, the death of Tengo's surrogate father from a condition the doctors couldn't clarify, could have been the result of exhaustion from a life spent working, his cradle to the grave work life ended with him being buried in his uniform had a crushingly understated sadness to it, it almost appeared like something from a 19th century novel depicting life in the work houses. At times it seemed that not a great deal happens in a proportion of Book Three, but then again it does, Tengo's episode with hashish with nurse Kumi Adachi seemed to almost slip unnoticed amongst the subdued vividness of Murakami's prose, the translation of Book Three is by Philip Gabriel, I've read that the translation was split between the two translators to ensure the publication of the English translation came out as quick as possible. The breadth of Murakami's imagination is always something to be in awe of, and after reading the three books you get the impression that perhaps this is the first dropping of the pebble into the water in regards to how much of the story has been left but could be explored further, but perhaps this will not be the case, maybe Book Three will be the last Book of 1Q84, we'll have to wait and see, maybe a Book 4 will be a much slimmer volume, I've been thinking that maybe Book Three will not be the last to 1Q84.
Posted by me. at 13:40

not yet read my copies, although going by your supposition that they may be more, sounds like I'd better get started.
PS.Got my copy of 10 billion days & a 100 billion nights, which I hope to read soon, at the moment it's Black Rain