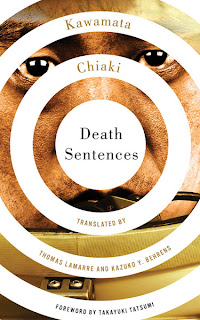 Originally published in Japan in 1984 Death Sentences/Genshi Gari by Kawamata Chiaki was awarded the Nihon SF Taisho Award in the same year, and has recently been published by the Minnosota University Press in a translation by Thomas Lamarre, (The Anime Machine) and Kazuko Y. Behrens, the narrative of the novel is spread over five chapters with an opening Prologue and a Final Chapter entitled: Oblivion. The novel is sandwiched between an informative  foreword by Takayuki Tatsumi and an expansive and explanatory afterword by Thomas Lamarre, which describes the structure of Kawamata's prose and explores the thematic implications that the novel raises, Takayuki Tatsumi's foreword contextualises  Kawamata's writing, both within the sphere of Japanese Science Fiction writing and also comparatively  with authors of the genre from the West, J.G Ballard, Philip K.Dick, Stanislaw Lem, among others. It could be said that Death Sentences only begins to resemble something that you could call explicit science fiction near it's closing, but the path it takes to get there could quite easily fit into being labelled with the speculative, the novel weaves between genres and timezones giving it a palpable spatial texture. It's hard to talk of Death Sentences without thinking of Koji Suzuki's novel Ringu, which was published a little over a decade after it, it has at it's centre a dangerous death inducing object, in Ringu it was embodied in the videotape, in Death Sentences the object has more of a literary inspired source in being a poem. The novel opens in the modern day with a special unit officer, Sakamoto, tracking down a copy of the poem through a couple in a love hotel, the next chapter leads on to describe the poem's origin and the history of it's author. As Lamarre mentions in the afterword, the sequencing of the events in the novel can feel or read as being subtly  syncopated, the narrative appears to focus into specific segments of the story that has an underlying looping element, the nuances in the book are slight and a reading of Lamarre's afterword explores these in greater detail, Kawamata often switches between first and third person narratives, the whole affect is a highly readable prose.

Much of the narrative of the following chapter traverses back in time and is told through the surrealist Andre Breton as he waits to meet a poet in a Paris cafe, as the clock passes the anticipated hour of their meeting, through Breton's recollections we learn of their initial meeting in New York some years earlier, these first chapters dip in and out of the history of Breton and other Surrealists - Marcel Duchamp, Anton Artaud and David Hare who all come into contact to varying degrees with the poet Hu Mei or as Breton comes to understand his name through Hu Mei writing his name in the air with his fingers - Who May. The poetry he writes is full of arcane obfuscation and include a number of curious words and usages of language that Who May has appeared to have invented, over time Breton's contact with Who May becomes patchy as the poet begins to slip into obscurity. We learn of the suicides and mysterious deaths of many of the surrealists who had come into contact with the poems. The narrative moves again through the proceeding chapters, forward in time to Sakakibara, the owner of a small press who becomes involved with a department store's ambitious exhibition of Surrealist artifacts that have been recently come to light, the centre piece of the proposed exhibition is Breton's travelling trunk, the contents of which contain many manuscripts which until now have remained unseen, amongst them Who May's poems, the effects of the poem again begin to show themselves in the contemporary world. The narrative continues following the poem's dissemination, jumping again via Sakamoto and through a reading of the poem the narrative lands to a Martian setting, the events described by Carl Schmitt, leader of a squad about to lead a raid on a Martian settlement searching again for copies of the poem. An intriguing and symbolic novel and translation that will appeal to the reader on many differing levels.

Death Sentences at University of Minnesota Press
Posted by me. at 14:27

the combination of French surrealist poets and the mention of names such as J.G Ballard, Philip K.Dick, Stanislaw Lem, this has gone straight onto my wishlist. Whilst checking this out I came across Full Metal Apache: Transactions Between Cyberpunk Japan and Avant-Pop America (Post-Contemporary Interventions) by Takayuki Tatsumi, which has also gone on the said list. Thank you.

Thanks for the tip on Full Metal Apache, looks like an interesting title to explore.