From the Fatherland, with Love - Murakami Ryu 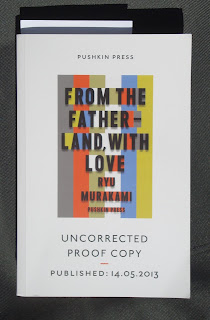 From the Fatherland, with Love is a gargantuan book in many ways, its appearance into English has taken the work of three translators - Ralph McCarthy, Ginny Tapley Takemori and Charles De Wolf, the translation flows so well that you wonder at how they might have approached the translation, whether perhaps in parts individually or maybe as a group. The novel has been selected from the ever decreasing number of titles available through the JLPP, perhaps in English translation Murakami's novels appear to fall into various camps, in one there are what could be loosely called his tales of contemporary horror such as Audition, In the Miso Soup, Piercing, and in the other there are his stories chronicling the lives of the dissolute members of society, the Akutagawa Prize winning novel, Almost Transparent Blue, 69, and to an extent Coin Locker Babies, a common aspect to Murakami's writing is his ability to present in a dispassionate voice the raw and often brutal aspects of life as it is lived for his protagonists, in From the Fatherland, with Love this can be seen in the group of societal misfits and violent criminals that slowly come together under the enigmatic leader Ishihara. The novel was originally published in 2005 in two volumes and is set in 2011 where through economic down turning sees Japan's position in the world marginalised.

Although some of the characters are more prominent and longer lasting than others, (Ishihara, Tateno, Jo Su Ryeon, - the KEF's press officer), throughout the novel, there is not really a main protagonist to the book as the narrative comes to us through a number of various characters points of view, it begins to separate out into three main perspectives, that of the Ishihara gang, the KEF - (Koryo Expedition Force), that have landed in Fukuoka from North Korea to initially hijack the city's sports Dome and also to that of the Japanese authorities in a hastily convened emergency meeting that are responding to the invasion, the plot involves an elaborately planned deception. Reading From the Fatherland, with Love, you can be reminded of those series of history books entitled What if..?, Murakami has applied this question to create a hypothetical narrative that at times feels unnervingly convincing, probably one of the most terrifying aspects is the KEF's cruelty and torture which is cloaked under an amiable hospitality on the surface. The novel is a large one, but with it Murakami has created a space in which that through his characters has enabled him to explore and address the concerns which both reflect the real and also of the well pondered hypothetical.

Similar to the epic novels of yesteryear at the beginning of the book there is a detailed list of principal characters, and as each character is introduced they are usually also given an additional biographical portrait, new characters are introduced even in the final pages although Murakami's view is panoramic in displaying how the unfolding events encroach into the lives of the novel's characters. As these events unfold we usually view them from one groups perspective, in places the full details of events are not fully disclosed to one party, so by turns we see how events are presented and then we see how they actually occur, each time this happens previously withheld details are revealed to the story and the narrative grows and develops, in this way it conveys very well the process of how information can be manipulated, it at times feels something akin to working your way through a series of inter locking rooms. Added to this there are events that we become aware of first but remain unknown to the characters, we read as they unknowingly approach the events we are already privy to. Trying to convey this fantastical plot line, it feels to begin with that there is a constant feed of facts provided to keep the feasibility of it afloat, and Murakami does a pretty convincing job at this, although with a novel of these proportions and alternating perspectives there's a few moments where it feels like it dips into occasional  repetition, but these are slight and essentially part of the novels structure.

Through this hypothetical narrative Murakami also gives over many episodes to examine many different issues, how the two different cultures perceive one another, the North Koreans surprise of the initial passivity of the Japanese, and as the soldiers become more adapted to life in Japan there are various scenes in which they become apparent of civil liberties previously unbeknown to them, and the added luxuries of smoking real brand cigarettes, the softness of the fabric of clothes, also the coming into contact with morally corrupting pornography which potentially threatens morale. Also in various instances the characters talk of the two nations past history and turbulent relationship, this probably is most markedly looked at near the end of the book in the relationship between Dr Seragi, an aging doctor who works in the hospital situated next to the KEF's encampment and Hyang Mok, a female member of the KEF, Dr Seragi had attempted in vain to halt an execution being carried out by the KEF, Hyang Mok witnessed him being restrained and taken away but later meets with him. In turn the conversation turns to events from each of their pasts, for Dr Seragi his regret and being unable to prevent executions carried out by the Japanese during the days of the occupation, and for Hyang Mok her sense of guilt over the death of her child through starvation.

Perhaps some might not appreciate how the novel develops a scenario or character only to drop it to move on to the next, it could be said that this is an integral to the novel's pacing, but if someone were also to mention that this is one of the most impressive of Murakami's novels to be translated to date, you'd probably be hard pressed  to disagree.


From the Fatherland, With Love at Pushkin Press

an interview with Murakami Ryu via Pushkin Press at vice.com

Many thanks to Pushkin Press for providing a reading copy.

Just about to start this, so will pop back and compare notes, although it has been a book I've been looking forward to.

Hope you enjoy it!.

I guess finishing the book I've begun to contemplate the way in which it ends, but I'll wait and look forward to reading your post.