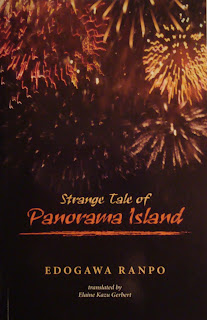 The reviews that I've seen of Strange Tale of Panorama Island have managed to steer away from divulging plot details, as it's novella size in length it makes it difficult not to give one thing away without giving away another, then another, so perhaps this post will be kept to leaning towards the impressionistic. Strange Tale of Panorama Island is translated by Elaine Kazu Gerbert who also provides an introduction that contextualizes many aspects that the novella features and looks also at the stories that inspired Ranpo, as you'd expect Poe features largely and in particular the story The Domain of Arnheim from 1847. Although I'm uncertain when it first appeared in Japanese translation a part of me was expecting to see mentioned The Island of Doctor Moreau by H.G Wells but perhaps the only relation to these two works is in name only, The Island of Doctor Moreau deals perhaps with a philosophy and enquiry which is heading in an altogether different direction, although it could be said there is some overlap of ideas and themes, the human manipulation of the natural world, where in The Island of Doctor Moreau the initial horror is in the physical aberrations in Strange Tale of Panorama Island it tends to lean more to the psychological, that said there are moments of distilled horror here.
Strange Tale of Panorarma Island reads very sequentially, the book opens in describing the present state of a little known island that the locals name as Okinoshima which has been the site of a construction project somewhat resembling an entertainment park that has fallen in to a state of abandoned decay, with this description set up Ranpo begins to work his way back in telling how this has come to be. The main protagonist is the dissolute student/writer Hirosuke Hitomi who dreams that if he were to come into a fortune he would one day work on constructing his own utopia and bring it in to being and through a devious and dark deception he manages to have a fortune at his disposal as head of the very wealthy Komoda family. Hirosuke seems to have succeeded in his plan although Chiyoko, the wife of the head of the Komoda family, Genzaburo, who has recently passed away is the only person who'll maybe put his scheme into jeopardy.
The plot line is a relatively simple one, as the novella comes into it's own the reader is taken on a phantasmagorical journey towards it's inevitable and horrifying culmination, the reader senses that it'll finish on a grizzly note, but the way that it does is spectacular in it's abruptness and originality. On it's way, via underwater kaleidoscopic viewing tunnels and rides aboard swans that perhaps aren't real swans the narrative threatens to displace our faith and confidence in the dimensions of the external world, Hirosuke's creation distorts natural laws of perception which could be interpreted as reflecting his own warped personality, at points throughout the narrative Ranpo describes imagery and events that might potentially provoke abnormal desires of his characters and also as he hints within the reader. The novella was originally published in 1926 and it's interesting to contemplate the plethora of reactions that it would have provoked in the readers of its day, Ranpo's narrative voice is one whose influence arches across a broad spectrum of Japanese fiction, not only of horror but also in detective fiction, all underscored with forays into penetrating psychological explorations of a darker hue, here it could be said that among other concerns portrays the notion of adoptive identities as well as exploring the meaning of the transposition of the artistic impulse into the physical world and its consequences, and operating on another level a tale of megalomania that veers onto a path far off the ordinary.
Elaine Kazu Gerbert's introduction is both informative as well as provoking, prompting the reader to delve further into reading more extensively from the era.
Strange Tale of Panorama Island at University of Hawai'i Press

This writer's been on my wishlist since finding out about his name, thanks for the reminder.

I've had a copy of 'Japanese Tales of Mystery and Imagination' to read for a while, and I did dip into it before reading 'Panorama Island', - a unique reading experience!.