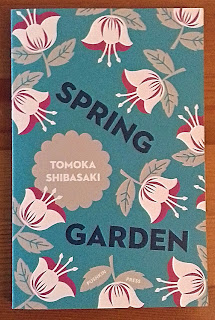 It's a little difficult to describe the events of Spring Garden without repeating the publisher's description on the reverse of the book, published as part of the Pushkin Press series of Japanese novellas Haru no niwa was awarded the Akutagawa Prize in 2014 and is translated by Polly Barton. One of the main narrators, Taro, is recently divorced and lives alone in a block of apartments slated to be sold off to developers, as the story progresses the building begins to empty of it's tenants, interestingly each of the apartments is named after signs from the zodiac, so in places characters are referred to in regards their respective sign, e.g Mrs Snake.  Another prominent character is Nishi, a woman who lives upstairs, whom Taro becomes acquainted with. A central enigma to the story is that of the house that the owner of the apartment block, Mrs Saeki used to occupy, as we hear of Nishi's fascination of the building, which is an amalgamation of old and new, East and West, we learn of her first exposure to the building through a photobook entitled 'Spring Garden' by Taro Gyushima and Kaiko Umamura, so there are aspects to the novella that overlap with the images of 'Spring Garden', in a way instead of having 'a book within a book', there remains the resemblance of a book within a photobook.

An aspect of Shibasaka's prose is that of control, the pacing of the novella makes space and time for, at times understated contemplative observations, it's a novella about progressions and regressions, the old building being torn down, people moving on, the photobook 'Spring Garden' acts itself to open up a chapter from the past, briefly we see the progression of the lives of it's authors, and added to this is the history of the tenants of the house central to the subtle speculative enquiries of the novella. Through the photobook 'Spring Garden' and the narrative at hand there is a subtle rebound of the past between the two and the links that may reach between them. As well as dipping into the lives of Taro and Nishi and their progressions, Taro re-questions himself about his father's remains and the pestle and mortar, there's an array of orbiting characters, the Morio's, Mrs Snake, Numazu, (Taro's colleague), and the appearance of Mrs Saeki's son near the end of the novella. Interestingly Shibasaki adds an additional narrative perspective toward the end of the story through Taro's sister which broadens the scope of perceiving his character.

Spring Garden, as mentioned before feels very contemplative in mood, being perhaps possibly somewhere between Hiraide's The Guest Cat and maybe, Togawa's The Master Key, (ok perhaps only in as much as the setting's equal), Shibasaki plays with a number of enigmas, some remain as backdrop and some move to the fore, and between them, and between perhaps the buildings of the book, the past and present tread a path both broken and constant.