The Secret of the Blue Glass by Tomiko Inui 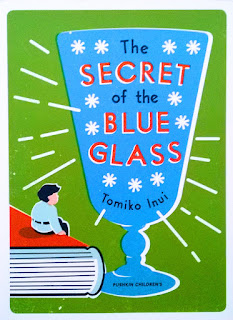 The Secret of the Blue Glass was published originally in Japan in 1967 and has been recently published by Pushkin Children's in a translation from Ginny Tapley Takemori. Although for the younger reader the book makes for a deceptively layered read even for the adult reader, with it's setting covering the end years of the war the book sees it's characters facing it's harsh and tragic realities, it's main protagonist, Yuri being evacuated out of Tokyo. The book in many places is being mentioned in the same breath as of The Borrowers, as similar to that novel the book features the appearance of little people who are initially hidden away in the book room of the Moriyama family, whose various members secretly deliver milk to them in a miniature blue glass cup, the appearance of the Little People is connected to a Miss MacLachlan, an English educator who had come to Japan years previous. The narrative opens up more questions than it answers and full disclosure to some of the plotlines here remain unanswered, leaving many of the circumstances of character details left open at the end of the book, which is an interesting aspect that leaves the reader perched somewhere amongst the lives of a number of them.

An interesting juxtaposition to the book is that of the historical and the fantastical elements, over all the feeling that the novel conveys an anti war message can be felt, the novel also sees the father of the Moriyama's, Tatsuo, being imprisoned for having unapproved books on his shelves, which feels is a reference to occurrences of tenko for the younger reader. As well as observing the hardships facing the family, the narrative explores the world of the Little People and sees their perspective of the events unfolding around them, and also of the two children, Robin and Iris as they explore the possibilities of escaping the confines and boundaries of the book room with the aide of Yahei the pigeon. Visualizing the Little People in places is interesting, one might not help picturing them as stepping out from the movie La Planete Sauvage, the added detail that time worked more slowly on them, provoked the question how human are they?, what other dissimilarities do they possess?. Another subtle detail which arises at the beginning of the book but slips off  subtly and disappears is that it is a narrative within narrative, and also at the beginning there are references to other classics of children's literature.

As conditions worsen, the Little People evacuate with Yuri to Nojiri, to Aunt Toyo and Granny Oto's up in the mountains and into a rural isolation, food and milk become scarcer, Yuri is faced with ostracization when rumour circulates over the circumstance of her father's imprisonment, it could be seen that one of the central elements to the novel is that of the balancing of allegiances and commitments, (the bringing of the milk is proof and the sign of the Little People accepting or allowing themselves to be seen by the larger people), and of course the outcome and aftermath of war. Whilst in Nojiri, the juxtaposition of the harshness and extremities of the war is countered with further fantasy and the feeling that we are venturing deeper into folklore territory with the befriending of the Little People with Amanejakki, an imp who lives hidden away in a shrine. As an adult reader of The Secret of the Blue Glass it's tempting to start looking out for deeper allegories and symbolism within the narrative, but this aside The Secret of the Blue Glass presents also a fascinating diversion into the realm of alternate realities, a unique and valuable read.

The Secret of the Blue Glass at Pushkin Children's