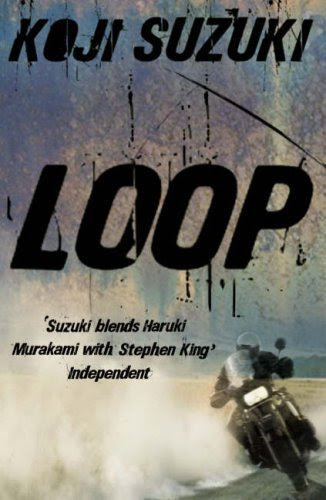 It's been a long time since reading Ring and with a translation of Edge due to be published in April I thought I'd catch up with one of Suzuki's back titles. The translation of Loop is by Glynne Walley whose forthcoming translation of Yoshinori Shimizu's 1992 novel Ninja to SushiNinja and Sushi is a book I've been eagerly waiting to read. Big blockbusting novels usually induce a slight feeling of apprehension and trepidation, although Suzuki's novels have come to represent cornerstones in the landscape of both Japanese popular culture of the 1990's, and then globally as the phenomenal bestseller was exported and adapted to film, and then given a Hollywood makeover. My memory of reading Ring is slight, so I anticipated that some of the connections here were going to pass me by, as I've yet to read the Ring spin off collection Birthday, but the novel stands on it's on plots and themes well enough, in the second half of the novel the story line of Ring is actually re-introduced and connected to the one going on in Loop. The central character, Kaoru, a young man whose father had worked on an A.I experiment, a massively ambitious project involving an array of super computers dotted about the globe, the first few chapters of the novel is set during Kaoru's formative years, late nights spent talking about scientific theories with his father, Hideyuki, are recounted, Kaoru begins to make connections between two maps printed off his computer, one showing areas of longevity in the world's population and another showing areas of gravitational anomalies on the earth's surface. Kaoru's mother has a healthy scepticism of science, and her interjections seem to inspire as much as they deflate her son's enthusiasms for his subject. Kaoru notes that the two maps show that the high area of longevity and gravitational anomalies share the same locations in some spots on the planet, notably around the four corners region in north America, being a somewhat mathematical prodigy, Kaoru begins to deduce more connections. Coincidentally Kaoru's father, Hideyuki is set to go there on a work assignment, and he makes a promise to Kaoru that they will one day go there.

The narrative moves on some years later and the projected trip has been cancelled due to the discovery that Hideyuki has a new strain of a virulent cancer, the narrative is filled with descriptions of biological scientific theorizing and describes this new strain of cancer in detail, it's course and source remains elusive to the scientists studying it. Whilst visiting his father, Kaoru comes to know Reiko and her son Ryoji who is also  receiving treatment for cancer, Kaoru is employed by Reiko to tutor Ryoji, whose father passed away, Kaoru's and Reiko's relationship grows, he learns that she is also a carrier of the disease. At the hospital Kaoru meets Professor Saiki who allows Kaoru to study the cancer in his father's blood cells. Through his father's suggestion Kaoru meets Amano who had worked with Hideyuki on the loop project, and through him Kaoru learns of Kenneth Rothman who had also worked on the project, and learns of his last known address in a remote town in the Mojave desert. Kaoru begins to come to the understanding that the new strain of cancer and the loop project are somehow connected, after discovering that Reiko is pregnant with his child, Kaoru decides that he must travel to the site in north America and find Rothman.

Although the plot to the novel is quite a simplistic one, the ideas and connections that Suzuki puts forth in it are fantastically imaginative, the comparison or juxtaposition of the loop project being a replication of reality within a computer with that of the  proclamation from Genesis that 'God created man in his own  image', puts forward the notion that we are already living in a form of virtual or replicated reality, that is if you happen to be a believer, and the novel witnesses a process of scientific reincarnation taking place in it's tumultuous finale.

Thanks for this review. I like Suzuki Koji a great deal. Have you read the sequels to Ring as well (i.e. Rasen)? Anyway, I'd like to pick up another series, i.e. Loop, now. Nice suggestion.

I've not read Rasen yet, only the Ring and some of the stories from Dark Water which were less supernatural horror more strange stories. I'm looking forward to reading Edge, hope you enjoy Loop!.

Enjoyed this,Ring & spiral(Rasen)When I read them a few years ago.

Think I'll finish the stories in Dark Water and then read Edge when it's available. The end of Loop was amazingingly done!.