Citadel in Spring by Agawa Hiroyuki 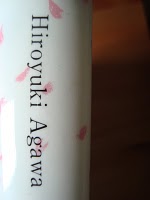 Recently looking through some old posts that I'd kept hidden away for an unknown reason I found this post I'd written some years ago on Hiroyuki Agawa's novel, Citadel in Spring, not sure why it hadn't made it to being posted. It seems like an appropriate time to put it up with the very welcome news that Kurodahan Press are due to reissue the novel, along with Osamu Dazai's Blue Bamboo, both of which were originally published by Kodansha International. Although the novel references historical events the narrative avoids from being read in an overtly documentary style, perhaps it could be said that a large portion of Citadel in Spring appears to have been shaped by the author's own experiences.

Citadel in Spring/Haru no shiro, was originally published in Japan by Shinchosha in 1949, and published by Kodansha in this translation by Lawrence Rogers in 1990. It opens in 1941, and through the central character, Koji Obata, a student of Chinese Literature, we see the years that lead to Japan's defeat, culminating in the atomic bombing of Hiroshima. Like Agawa himself Koji's family is from Hiroshima, and for a while his family have been aware that he and his friend's sister, Chieko, have been close, both families think that possibly they would make a good marriage match, although nothing definite or formal has been said to each other. Koji visits his teacher Mr Yashiro, and they watch as departing soldiers make their way to Ujina Harbour, Koji thinks a lot about the part he will play in the war, and contemplates upon his own mortality. As a student he and his group of friends receive some field training, he comes to the conclusion that he's not afraid that if he has to give his life in this war he will. He meets with Chieko again before leaving for university in Tokyo, and unconventionally she proposes to him, thinking it through he goes with the decision that he wants to see more of life first, his feelings are ambiguous, retrospectively he thinks he might be making the wrong decision by turning her offer down. He hears of the defeat of the Americans in Hawaii along with news of the escalating fighting. He visits his elder brother who lives in Manchuria, and on his return to Japan his graduation is brought forward, and he joins the navy. Getting together with his friends before departing, Kurimura, one of his party confesses to the gathering, 'if the order 'suicide squad, one step forward!' is given I will serenely take one step backward'. After leaving his friends, he visits Chieko again and although they embrace, nothing is planned for their future, Koji feels that she will be waiting for him to return home.
After a brief stint at sea Koji is assigned to code breaking duty, as he was a student of Chinese for a short time he is set to work on decoding signals from China. He gets a visit from Chieko's brother Ibuki, who tells him of his near death experience as the ship he was on went down. Another friend Tanii works on decoding Britain's naval code, a daily search for the repetition of one number among many thousands, the book gives some examples on code breaking of the time, with descriptions of Domic codes. Koji's boss is the unaffected, Commander Ezaki, disinterested in what his staff tells him, he spends most of his time sitting in his office smoking his pipe, (with English tobacco), his favourite novel is Hanshichi, and he reads Ranke's The Great Powers, which he hides in a red cover so it will look like he's reading a classified document if he's caught out, but after Koji detects a British ship Ezaki begins to behave more kindly toward him, taking him more seriously. Koji is transferred to Hankow in China, and the unit hears the news of the Battle of Leyte, they interrogate a captured American serviceman and continue to monitor the movements of B-29 bombers at Chengtu airfield, the code that the Americans are using appears to be unbreakable, eventually though Koji manages to decipher that the bombers are headed their way, during the raid magnesium bombs are dropped on the city, but Koji's unit escapes from any direct hits. Recovering from the raid Koji learns that his new commanding officer will be Kihara, a man from his past, whom he suspected of stealing from his friends - a man he detests. It doesn't take long before the hatred between the two men boils to the surface, Kihara beats Koji after he exposes his crime, but knowing that he's been found out and combined with the uncertainty that the defeat will bring Kihara's morale gives out and he resorts to drinking heavily. Piece by piece news reaches the unit of food shortages, and the fact that the Yamanote district is bombed, eventually they hear of the bombing of  Hiroshima and finally of the announcement of surrender. The novel returns to Chieko, Koji's parents and teacher in Hiroshima in the immediate aftermath of the bomb, and projects further with Koji contemplating back on the war and it's implications of peace in it's aftermath.
Haru no shiro/Citadel in Spring won Hiroyuki Agawa theYomiuri Prize in 1952, other translations of his writings and novels that have appeared in English translation include; Burial in the Clouds, The Reluctant Admiral - Yamamoto and the Imperial Navy, (a biography), and also the harder to find novel, Devil's Heritage/Ma no isan, a novel from 1953, set in Hiroshima after the atomic bombing.

Nearly missed this one! Sounds like a great read - I haven't really seen much which deals with the war years, so this would be good to try.

Would very much like to read Devil's Heritage, sounds like an intriguing title, would be good to see it reprinted.

I guess some famous war novels could include -

Fires on the Plain by Ooka Shohei

The Burmese Harp by Takeyama Michiio

Zone of Emptiness by Noma Hiroshi

and a recommended anthology -

The Catch and Other War Stories

as with Tony, although Fires on the plain, is on my wishlist.

Another I've been meaning to read for sometime is The Breaking Jewel by Makoto Oda.