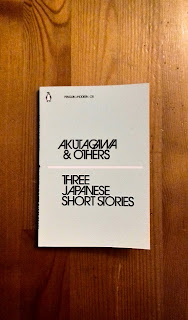 The next story of Three Japanese Stories translated by Jay Rubin is Closet LLB by Kōji Uno, 1891-1961, Three Japanese Stories is a sampler of the larger Penguin Book of Short Stories which is forthcoming from Penguin. Looking at this book I'm beginning to wonder at how the fuller book will be organised - if it'll be compiled chronologically or thematically. Closet LLB concerns the character Otsukotsu Sansaku who when the story opens has seen five years pass since obtaining his Bachelor of Law degree, he remains living in the same digs although the ownership of the building has changed many times within this time. The story relates the history of Sansaku's education, initially a prodigy whose initial inspiration stemmed from the writer/children's author Iwaya Sazanami, Sansaku had the desire to become a novelist, which we're reminded hasn't changed at the time of the narrative. There is some mystery over his degree as he initially passed his Law exams and acquired the letters LLB but his main passion is literature, although the story also develops into being one of passions thwarted after Sansaku's father's passing, family debt, Sansaku becomes dependant on a cousin of his father's, Oike and is pressurized by the family into studying Law. This is counter balanced with the fact that he has had some success as a writer of Fairy Tales and various short pieces and on the horizon glimmers the perennial hope of scoring success with a novel for adults.

So, perhaps there are a number of autobiographical connections reflected in the story to contemplate, the family debt, of the move to living with Grandparents, the struggling writer, but here it seems Sansaku's aspirations fizzle out, he continues to live the life of a student of literature whilst the world of literature and the arts appear to pass him by or so it seems, Sansaku has a certain bohemian lifestyle, spending time walking the city, his bed time two in the morning. It's been noted that Uno's writing falls into two camps, of being rather fragmented and experimental with that of later evolving into more conventional storytelling, Closet LLB feels more of the latter, although it does show signs of delving into interiorities and also of the Russian writers he read. The latter part of the story sees Sansaku delve further into his retreatist realm as rather than take out and daily make his futon from it's cupboard Sansaku decides to save the effort and begins to sleep in the closet, and due to this positioning and the level of his room he can observe the to and fro of passersby. The story ends on a meditative note on the nature of intellectual superiority and of it's worth and it's application to the happiness of life or perhaps the lack of it. As mentioned before it's interesting to contemplate the autobiographical elements of Closet LLB and of the themes it raises, the story has been translated previously as The Law Student in the Garret in the highly recommended anthology Three-Dimensional Reading edited by Angela Yiu, for my post.

can you please explain character of sansaku ,we are not japane but indo english ,please give poiunts on sansaku character and why also please upload videos .if you can on youtube within one day

apologies I'm not on there, and it's been a long time since I read this story.